The U.S. economy is heating up. On Friday, U.S. payrolls increased by 379,000, well above estimates. One measure of U.S. manufacturing showed its strongest gain in six years for the month of February1. As we approach the summer months with vaccines widely distributed, we would expect the strength to only snowball from here. Travel and consumer spending is starting to pick up and come Memorial Day, look out.

With this “hot” economy, we are also starting to see emerging indications of inflation. Inflation expectations, measured by the five-year U.S. breakeven rate, have been on a steady climb since bottoming in March of last year, and have accelerated over the past few months along with the proliferation of stimulus programs. Breakeven rates are now at the highest levels since just before the financial crisis in 2008. 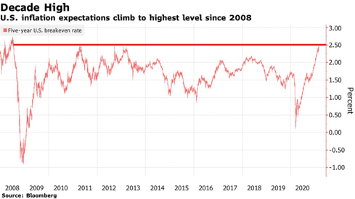 Running a hot economy is good for accelerating the recovery coming out of a crisis, but it does present some risks that the market is starting to process. This has shifted some winners to losers, and vice versa.

For one, bond yields have been trending higher since August. The 10-year Treasury has jumped a full percentage point from around 0.50% in August to over 1.60% this past week. That may not seem like much, but every percentage point move in yields is consequential for bondholders and, eventually, to the relative appeal of stock valuations compared to those bonds. And these recent rate moves have come in large chunks.

As it relates to stocks, the growth “premium” is now being rapidly re-priced, especially on days that treasury yields make sizeable moves. Value stocks have seen strong gains relative to growth names partly because a) the cyclical benefits of a strong economy benefiting sectors like financials, materials and energy and b) growth stock valuations were in many cases too high and are now being reset lower.

To us, that does not tell the whole story as some of the highest momentum stocks have been hit the hardest. Tesla has seen it stock fall from over $900 to under $560 in a span of a few weeks. The stay-at-home stocks are also seeing their valuations come down to earth. Peloton and Zoom are down 40% and 45% from all-time highs, respectively.

Even the mega-cap growth names have languished. Amazon and Facebook have both corrected 15%, now flat since last July despite the market being up over 20% during that same time. Apple’s stock has shed 20% from its all-time high despite its mammoth fourth quarter. For those who were fully invested in growth stocks, this change in leadership is likely more painful than what the market is reflecting, with the S&P 500 less than 3% from all-time highs and the Dow hitting a fresh record high this morning.

We have mentioned in the past how the catalyst for value could be rising rates and a stronger economy, and we are getting both this year. We would expect them to happen at the same time given that rising rates reflect a strong economy. The Fed has little control over long-term rates which are mostly a reflection of economic growth and inflation.

Bond yields and stock valuations are not the only signs of inflation we are seeing. Commodities have had a momentous rally in recent months. Lumber prices have soared nearly 150% over the past year while copper is up nearly 60%. Lumber reflects the strength in housing and the limited supply of existing homes. For copper, prices have nearly doubled off the March lows of last year and are at the highest levels in nearly a decade. Much of this strength is due to the high volumes utilized in emerging industries like renewable energy and electronic vehicles, but also general expectations for continued spending related to stimulus.

As it pertains to stimulus, the Senate passed the $1.9 trillion stimulus bill this weekend with the House expected to have sufficient votes to also pass the bill. The biggest difference with this bill versus the one previously passed by the House is the elimination of the $15 minimum wage.

Piling on another nearly $2 trillion in stimulus can only add to these emerging inflation risks, even if this bill was a foregone conclusion. Either way, we do not expect these inflation tremors to go away anytime soon.